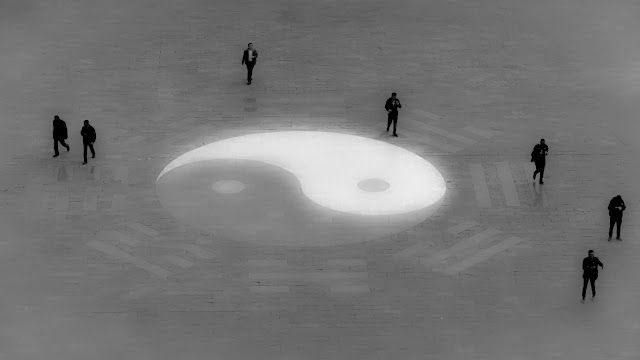 There are two main streams of moral traditions — one idealistic and absolute, the other relatively pragmatic and flexible. Each is a product of history and cultural perspective.

Absolutely, from God to Man

About six thousand years ago, God switched on the light, made things, and authorised humans to reign over them. Man was supposedly in charge of the world, which wasn’t exactly the entire universe — something we still don’t know much about, but pretend we do. Subsequently, God gave religious peoples the foundation of their moral codes. Nothing too complicated, but thou shalt not kill or steal is universally sensible, and works well if followed honestly.

Gradually, science nudges God off His throne. Humans take over, and steadily expand their God-given birthrights to reign over fish and birds. They march to conquer strange lands, funny heathens, the oceans, and nature in general, singing war songs.

Nonetheless, God’s exit has left an empty spot in their psyche, a vacancy which physics and chemistry can’t fill. After centuries of spiritual dependence, the urge to believe in something doesn’t go away easy. Moral excuses are needed to justify actions, many of which detrimental to themselves and others.

In cartoons, funny characters saw doggedly at the branch they’re perching on. In real life, Homo sapiens exploit their one and only living environment for short-term gains, and call it human achievement. Meanwhile, political ideologies have replaced religion, rationalising the killing and destruction of heathens. In man’s hand, morals have become more arbitrary, manipulative, and impractical.

And impractical ideals inevitably lead to hypocrisy and fanaticism.

Supporters of specious doctrines seldom “act as they preach” because, well, what they preach is not always practicable. But stepping back to rethink is sacrilegious. Moral principles are tautologically and absolutely good, uncompromisable. An ideal is a perfect end-point to strive for. Revising something perfect is yielding to the dark side, not incremental refinement. Unfortunately, to loyally defend untenable beliefs and infeasible ideas is the first step to fanaticism.

Progressively, from man to nature

Moral traditions of atheistic and polytheistic civilisations tend to be more pragmatic and utility, and less absolute about right and wrong, which tend to change expediently. Reality is not ideal.

The Chinese civilisation is exceptionally atheistic. All its indigenous religions specifically avoid God, and are technically not religions per se. In translating concepts with religious or spiritual implications, exact equivalents are sometimes difficult to find.

Dao is the way, the ultimate truth, the unfathomable mystery of the universe and existence. The term was coined by Lao Zi, the ancient sage who vaguely told us what Dao may or may not be in his esoteric Dao De Jing. In short, Dao is deeply mind-boggling stuff.

De is mundane, and can be subdivided according to purpose. Gong De（公德）is public conduct. Si De（私德）is private behaviour. At a higher level, Dao De guides us to live according to Dao, to be in line with nature’s way, to the best of human observation and conjecture.

Chinese sages of all philosophical persuasions concur on one thing: we must observe the way of nature, and try to live in harmony with it, in order to better our survival chances as a social species on this planet. Humanity has no other option. Why do we need professional sages to tell us something so plainly obvious?

The ultimate goal is therefore Tian Ren He Yi （天人合一） — be one with nature. This objective may sound just as abstract and unattainable as God, but is fundamentally different. Getting to Tian Ren He Yi is an exploratory journey, like life itself, not a definite endpoint. More importantly, in the iterative process of discovering (or rediscovering) our place in the universe, we may accumulate insights, and become incrementally more civilised. Many examples today confirm to us that civilisation is the product of time and effort. There’s no shortcut.

It may be argued that morality, with or without a religious theme, is rigid and idealistic, whereas Dao De is open and practical.

Practice is indeed a crucial aspect of Dao De. Only through practice can we learn and refine,  as we try to understand Dao in infinite steps. To be Zhi Xing He Yi（知行合一）—  to unify knowledge and action, or strive for consistency between words and deeds — is therefore fundamentally important. Ideals which cannot be put into practice are useless.

Besides a path to becoming one with nature, Zhi Xing He Yi is also better for mental health.

A person who lives and acts consistently with what he knows or believes for the time being is less burdened by guilt and regrets. Mistakes due to ignorance can be corrected as he understands life better through experience. On the contrary, not walking the walk risks getting ideas stuck in a mental cul-de-sac. The more a person thinks he knows, the more his mind is cluttered with impossible ideas and unreachable goals, the more confused he becomes.

To probe into the unknown is human nature, but humanity has taken no more than a few tiny steps in this cosmic pilgrimage. Some may disagree, and think that humans are “nearly there”. Some may find this proportion humbling and awesome. Others may find it disheartening and exasperating. But regardless of perspective, those who learn and adjust as they discover will find it more fulfilling, at least for a while.

Moralists who talk all the talks, but walk little of the walk, are a danger to themselves and others. The more they blather about morals and principles, the deeper they fall into hypocrisy, or insanity.

Email ThisBlogThis!Share to TwitterShare to FacebookShare to Pinterest
Labels: Daoism, Morals, One with Nature