Thinking Inside The Box 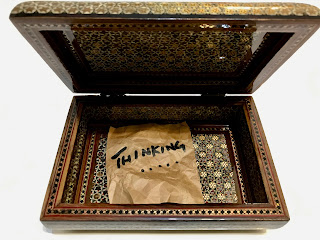 
Calling ourselves Homo Sapiens — literally wise man — has to be either missed irony, or hyperbolic self-flattery. Even dummies know that the average human is far from wise. Quite the contrary, whenever life is good, most of our species take petulant pride in not thinking. Behind dainty expressions of ostentatious innocence and unworldliness is an unmentionable awareness that being really stupid without consequence is a modern privilege, a rich-folk thing, a secretly adored social status. Sure, during our negligibly short existence, the odd thinking specimens might have had delivered us from collective troubles, or led us to more favourable grounds for survival. But mass ignorance has since been reinforced, making such rare fortuitous events ever less likely in the future.
Read more 继续阅读 »
Posted by James Tam 谭炳昌 （过渡） at 12:18 No comments: Links to this post

LINK TO ENGLISH VERSION: Thinking Inside The Box