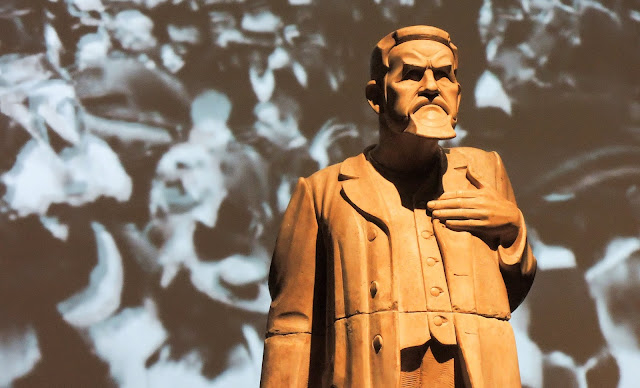 
Clash of Civilisation is an oxymoron. Truly civilised tribes clash over vital resources and existential issues, not values or beliefs. So what makes a society civilised? Clever technologies are not a defining condition. In uncivilised hands, they only make the world more dangerous and confused.

Queuing straight and calm on a hot day for ice cream is but a superficial indicator. When ten starving persons compete for three breads, those who insist on lining up nicely for their empty turn had long been eliminated by recurrent harsh reality in experienced old countries. Not long ago, no self-preserving Chinese would line up unless under supervision of a big stick. Now that there are eleven breads for ten well-fed folks, especially in the cities, orderly lines are the norm. It’s that simple.

Tolerance, if not necessarily respect, of differences is a fundamental attribute of civilised behaviour.

If you tell the typical Chinese that your god flies higher and faster than his ancestors and the Buddha working together, he’d be politely awed: “Wah! So impressive! Very good! Got to go now. Let’s have lunch sometime okay?” He won’t debate, and certainly won’t punch you for your amusing belief. He’d be even less inclined to comment on how your country elects leaders. It’s none of his business. Is it not? Before recent times, if you told him that Country A bombs Countries B, C, D, E, F… to make them vote for their leaders, he wouldn’t have believed you.

Civilisation clash therefore seemed to me somewhat irrelevant to China, until recently. Trump’s trade war makes me think that differences in “cultural genes” could at least be partly responsible for the current conflict.

The Cultural DNA of farmers and buccaneers

Technology has greatly enabled mobility in the past century or two, resulting in unprecedented demographic changes. Nonetheless, history and mainstream culture remain dominant influences of a society’s character. A country’s conducts, politics, religion, and trade are shaped by its cultural DNA.

America’s obsession with guns and warfares, for example, goes way back to the nation’s birth and development. Australia’s palpable eagerness to join any fight anywhere involving another WASP country is evidently based on racial and cultural kinship, contrary to the universalist principles which it claims to uphold.

The stock of America’s melting pot is extracted from seafaring adventurers and pirates (18th century colonialism was mostly piracy in deed and manner). Pirates were cunning and ruthless by professional needs, with an instinctual pack-mentality to combat nature and hapless strangers who got discovered overseas. How they treated strange natives of faraway lands depended on circumstances and incentives. In any case, even the ugliest atrocities could be transformed into heroic fantasies with a bit of imagination, and a few barrels of rum. They were natural story tellers. Their descendants still are.

On the other hand, old China was a predominantly agricultural community infused periodically with nomadic bloods unaware of the stability trap. China thrived on stability and harmony, often contrived through elaborate and rigid social codes.

"On this tiny planet, we’re all obnoxious neighbours to each other,
with nowhere to move to"

Farmers seldom moved. They lived with the same neighbours, however obnoxious, for generations. Differences had to be digested through negotiations, compromises, and the passage of time. This relatively static milieu trained them to be tolerant and patient, inadvertently preparing them for 21st century international trade and relationship. On this tiny planet, we’re all obnoxious neighbours to each other, with nowhere to move to.

Stability turns out to be an underlying cause of trade conflict?

Agreements and rules are needed for business. Expectedly, the authors of these rules enjoy convenience and advantage. But America, a leading architect and major beneficiary of the existing structure, is complaining about being at a disadvantage. To America, the world order is what it used to be, but not how it used to feel.

Nothing’s perpetually absolute. Attributes which bring advantage in one situation could become a burden later, under different circumstances. Farmers tend to be steady and circumspect, as folks with permanent addresses are apt to be. Their conservative customs are conducive to stability, which enhances productivity, trade, and prosperity. Yet these same traits induces resistance to change. When the shockwaves of industrial revolution reached Asia by sea in the 19th century, the results were devastating to the conservative ancients. Technologically clever soldiers of fortune took over. Yahoo!

But the ironies of history soon caught up with them. What did the victorious pirates aspire to? Ha! Stability! It’s human nature to desire harmony and stability, as attested by our ferocious ancestors from Manchuria and Mongolia. Gradually, sensibly, with justified confidence, the imperial victors from Europe established international protocols to govern navigation, trade, diplomacy, etc., systems which America took over and expanded. These systems are now under attack by their main creator.

One reason is that China, one fifth of humanity with a traditional affinity with trade, had miraculously revived from near death. An essential condition to its resurrection was the stable environment created by the ruling powers who had almost ruined the country. However, instead of rejecting it, China put aside historical animosities and ideological differences like a good farmer, and embraced it for the assuring stability. Enjoying a wide-margin supremacy, confident architects of the world order welcomed China to their framework.

Another cause of America’s tantrum is entirely internal. Intoxicated by decades of supremacy, its populist democracy is plagued by delusional self-righteousness, insecurity complex, and perpetual wars. America is unhappy for good reasons which it refuses to admit. As usual, it blames others. “China, China, China!” says Trump, whose career path suggests an overwhelming presence of thuggish genes. Petulantly, he threatens to press the reset button, and rewrite all the rules for everyone. His instincts tell him that stability favours China, whereas chaos favours America. Though a self-proclaimed genius of super intelligence, he doesn’t seem to realise that the world, led by his no-longer-great country, has long changed.

What may come out of this?

Trump’s atavistic attempt to perpetuate American supremacy fails to recognise that the international community has evolved for a few generations. The world has learned a bit from each other, endeavouring to become more civilised. Countries have become inter-dependent in commerce, sharing a common destiny with respect to the environment, two areas in which he intends to wreck havoc.

Trump’s behaviour baffles the pragmatic Chinese. American preeminence is not being challenged. Everyone is playing mostly by its rules. Why rock the boat? Naivety combined with a strong (genetic) aversion to conflicts prompt some Chinese to hallucinate an easy outcome: “It’s patently clear that there’ll be no winner. Trump will soon realise, and back off.” After struggling with “barbarians” for a few millennia, some Chinese are nonetheless bewildered by the close encounter of a live one. Others may hope that things will change when Trump goes, not realising that suppressing any potential rival is a core consensus among American elites. Trump’s open savagery is arguably less devious and hypocritical, therefore easier to deal with.

But all wars must end one day, when there’s no more blood left to spill. Discounting the doomsday scenario of total annihilation of mankind, a likely worst outcome would be substantial disruptions to the existing trade order, resulting in global depression of unprecedented scale. Everyone would be severely hurt. Pundits will disagree on how the two giant antagonists would survive and recover. In my view, China, being less populist and more experienced in hibernation, would be better equipped to weather a commercial ice age behind its enormous domestic economy. It will also bounce back quicker once the glacier has receded, having poked a few problematic domestic bubbles in the meantime.

Whatever the scenario, two things seem certain. Neither China nor America will collapse, or fundamentally change because of this commercial world war. And eventual recovery will be based on existing rules of the game. They cannot be rewritten in haste, especially when all participants are bloodied and shellshocked. To recast the international trade order according to America’s whims will be infinitely less likely after the trade war.

So, Donald the Great Again, why bother?