Kissinger's "On China" - Not Quite A Book Review 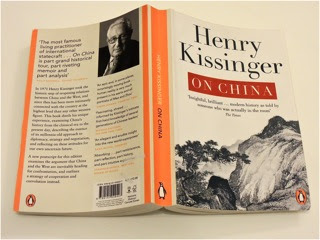 Instead of a proper review, this is more like a sketch of the thoughts which struck me while reading Henry Kissinger’s On China. Kissinger is one of the best known maestros of imperial atrocities, having involved with many highly controversial events, some of which absolutely indefensible. To write this "review", I've completely omitted Kissinger the person here in order to focus on his book On China.

In the past, writers were often individuals who saw things differently. Being different helped them to highlight alternative perspectives and popular social ills. Once in a while, they turned out to be right, and even listened to; and their visions delivered impact. Nowadays, books are written for a mass market. Guided by publishing preferences, more and more writers build their positions on opinion polls and market surveys. It is therefore refreshing to read Kissinger who, at nearly 90, has neither the time nor incentive to appease popularised prejudice.

The Western intellectual universe is supposedly open and diverse, yet it’s not easy to find an English book which does not focus disproportionately on the negatives, if it has a dimension on Chinese politics. Views that go against the standard opinion moulded by the Corporate Press simply won’t get much marketing room, unless the writer is Henry Kissinger. Rather than passing archetypically biased judgements, On China gives an unfashionably rational and human portrayal of the Chinese communist revolutionaries, in the grave historical setting which defined them.

The Chinese Communist Party (CCP) inherited a battered old country in 1949. China was surrounded by powerful enemies from all sides, and within. Having crawled through a century of threats and humiliations: the opium wars, Japanese invasion, and a bloody civil war, New China had little reason to be optimistic. The country was struggling to catch up with a hostile and advanced outside world. Literacy rate was 15% in a population stunned by the turbulent confluence of a millennia old feudal mentality, and a terrifyingly alien world order. Average life expectancy was 36.

Kissinger’s portrayal of Mao is perceptive rather than selective. As expected by common sense, Mao won the support of the masses and the loyalty of tough revolutionary figures, such as Deng Xiao Ping and Zhou En Lai, not because he screamed the loudest or stomped the hardest. Like any monumental leader in history, he had taken chances that were unthinkable to others. He had to be remarkably convincing to persuade his comrades to take one “impossible” risk after another. Since he turned out to be right most of the time, he became the boss. But like all big bosses, he was disastrously wrong every now and then.

Barely one decade after the establishment of the People’s Republic, in the late 1950s, backward China was at odds with both nuclear superpowers simultaneously, while troubles simmered at the Indian border. Mao saw one thing correctly: the need to industrialise. But none of them had any clue how. Literacy had improved, but nowhere near enough. Steel output was the thing that Mao had identified, so he made yet another desperate gamble: the Great Leap Forward. Senseless as it might seem from present day’s vantage point, the experiment must have had sounded less daunting than the Long March to his supporting comrades. Notwithstanding the ruinous consequences, China and the CCP miraculously survived, and retained self-determination. A few years later, in 1964, China conducted its first nuclear test.

One quaint thing about On China is that it actually offers constructive suggestions rather than delivering simple and passionate rants with delusional moral supremacy like many best-sellers do. Kissinger envisages a mutually beneficial Sino-US Pacific alliance based on common strategic interests and geopolitical reality, rather than ideology and short-term political expedience. His passing lamentation about US politics actually lends a human face to the hegemonic image of his country. Overall, his essays are designed to promote understanding rather than deepen suspicion. “When great countries deal with each other there is a balancing element involved, but the balance should be sought in non-military terms to the greatest extent possible.” Kissinger shows the vision of a statesman who deserves his Nobel Prize, before it degenerated into a cheap political tool.

Kissinger’s practical approach to geopolitics, giving preference to strategy, national interests and common objectives, has lost market share to a neo-imperialism which favours ideological dominance and military supremacy. It is ironic that his once conservative views have become non-conforming, even “radical”. Nevertheless, On China is an excellent read for anyone interested in a brief history and the political psyche of New China. Whether one agrees with Kissinger’s refusal to just close his eyes and bash China or not, one should have no problem enjoying his firsthand recount of fascinating episodes, given in elegant prose.