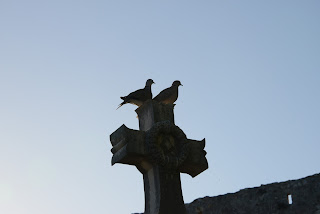 The American President tells the Japanese Prime Minister to apologise to wartime victims.
The PM in return asks if the President would do likewise!

“Mr. Prime Minister? The President of the United States wishes to speak with you. Is it convenient?” A man’s voice came through.

While holding, Nishihara took a comb from his breast pocket and ran it through his thin hair. A strand of hair came off with it. He noticed regretfully that the oily dandruff had returned. He wiped it off carefully, almost ceremoniously, with a paper tissue, then folded it into a perfect square before depositing into the top secret dust bin.
A voice came through, energetic and charming: “Sorry to keep you waiting Mr. Prime Minister.”

“No Poblem Mr. Pesident. Just call me Yoshio.” Nishihara had been advised to always be casual and relaxed with the Americans.

“It’s OK Mr. Prime Minister,” the President’s tone was casual and relaxed, nearly bouncy. “You guys change so often I find it easier to address you Prime Minister. That’s how I have it on my contact list you know.”

“Ah so. Uh . . .” Yoshio’s head reeled for an appropriate response. This was only his second telephone chat with the President. His first call was two weeks ago to congratulate him for becoming Prime Minister.

“Just joking Yoshio! My apologies! Too much stress in this job.”

“Listen Yoshio. Sorry to rush. I’ve only got a few minutes. To make a long story short, I need to talk with you about apologies.”

“Yes. That’s all it takes. You know I’ve decided to pivot back towards Asia Pacific. Your refusal to apologise has created, should we say, unnecessary resistance from your neighbours, since we are the closest allies.”

“Ah! So sorly.” Yoshio regretted being casual too soon. The President had neglected to reciprocate, and he was too polite to just go ahead and “call him Bob”. Now he was at an unfair disadvantage.

“Would you issue a formal apology about World War Two, so we can get this over with once and for all?”

“Sorry to be blunt Yoshio. But what’s the big deal about saying sorry. Germany did that long ago.”

“Let’s face it Yoshio —” Nishihara had been told that American Presidents seldom waited for Japanese Prime Ministers to finish their sentences. Just a cultural difference, nothing personal. “— With respect, Japan did kill a lot of innocent people after all didn’t it? Come on, just a show. Makes you look generous and civilised.”

Yoshio’s face turned red, and was glad that this wasn’t a video phone. He scratched his scalp with the pinky of his free hand, then noticed he had run out of tissue paper to wipe it. “Mr. Pesident,” he said, doubling his normally thoughtful pace, keeping his pinky stuck out like a sore thumb. “So sorly to be lude, but you killed a lot of people in Yilaq too. Have you apologised?”

“Come on Yoshio, we’re not talking about the same thing now.”

“Mr. Pesident, you went into Yilaq to catch Osama san. He was never there. You said Yilaq had weapon of mass destuction, which was not so. More than one million have died. Perhaps you should also apologise?”

“You know I was not the president then Yoshio.”

“Ah, I was not even bon during the war Mr. Pesident.”

“Yoshio, why don’t we talk about this when we meet.”

“As you wish Mr. Pesident.”

“Well, I’m sure you know how to make theirs lower.”

“Thank you for your confidence Mr. Pesident. We’re hoping to make theirs less than 9% before the Febualy election.”

“Hey, that’d make the combined approval below 20. Are you aiming for the Guinness Record or something?”

“Ha ha. You are so humourlous Mr. Pesident.”

“Look, Yoshio, got to go. I’m seeing you here in March right?”

“I vely much hope so Mr. Pesident. Either me, or my successor.”

“Good talking to you Yoshio.”

“Good talking to you Mr. Pesident.”

Nishihara put down the phone and pressed the intercom for his secretary: “Mrs. Nomura, can you bring me a new box of tissue?”

I am Mariam,from what I can read. It has been sad news and scam to everyone about Voodoo casters or so. But to me they are so real because one worked for me not quite long ago.i met this man on a blog his name is Dr Abalaka is a very powerful man.I traveled down to where his shrine his and we both did the ritual and sacrifice.he had no website yet but he promised to create one as costumers are requesting for it, and now i'm free from the powders of sickness.I don't know about you but Voodoo is real;love marriage,finance, job promotion ,lottery Voodoo,poker voodoo,golf Voodoo,Law & Court case Spells,money voodoo,weigh loss voodoo,diabetic voodoo,hypertensive,depression healing voodoo etc,high cholesterol voodoo,Trouble in marriage,Barrenness(need a child),Luck, Money Spells,he also cure any cancer and HIV,it's all he does. I used my money to purchase everything he used he never collected a dime from. He told me I can repay him anytime with anything from my heart. Now I don't know how to do that. If you can help or you need his help write him on (dr.abalaka@outlook.com) and also his cell number: 760-935-3804 you can text him because he use to be very busy some times,i believe that your story will change for better,or if you have any question you can contact me here as mariambaurice@gmail.com best of luck.