Her Majesty and Commies 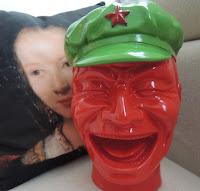 The irony of history often becomes sharper with time. Given enough of it, the intricate matrix of cause and effect often produces results which were previously unimaginable. The significance of any event does remain “too early to tell” for a very long period.
In 1792, King George III (Why couldn’t they name them something other than Henry and George to avoid version numbers?) had recently lost the American colonies. It probably drove him nuts, and to pivot towards Africa and Asia. He sent Lord Macartney (who’s also George by the way) to open trade with China. “Get some kind of a free trade agreement, George,” said George. But Britain and China were going through drastically different phases in their life cycles. Britain was in the middle of a world shattering industrial revolution. After centuries of religious bondage, it had discovered a newfound sense of enlightenment, enjoying an unprecedented level of confidence and ambition. On the other hand, the ageing Emperor Qian Long was tired. Go tell your O King Georgie Number Three the Celestial Empire doesn’t need gadgets, he told George lethargically, then dozed off.


Notwithstanding his failed embassy, Macartney gained the opportunity to observe China closely, and made some astute assessments. Though daunting in size, sophistication and organisation, China was becoming an anachronistic paper dragon. Subsequently, in the first Opium War, a few thousand British soldiers defeated a million-strong army.
“But it was technology disparity!”
Bullshit. Had the Qing soldiers (who wore a huge embroidered character valiant on their uniform) been sober, they would have easily fended off the vastly outnumbered expedition arriving on wooden men-of-war, powered by wind and rum, equipped with cannons capable of an on-board firing range of only a few hundred meters. China had a highly developed military heritage which could have bridged the technology gap at that stage without difficulty. How many cannon balls could the invaders lob onto the Middle Kingdom? But Qing soldiers were mostly opium addicts led by thoroughly corrupt leaders by then. To make things worse, the increasingly insecure Qing Court did not trust the Han generals, and had effectively dismantled the military by isolating the commanders from their soldiers.
Anyways, China’s Century of Humiliation followed. While nobody likes humiliation, it was a timely wake-up call. Without it, the country could still have an emperor? Of course history has no room for big IFs. It took a bit of time for China, old and bulky and dopey, to clamber out of bed. But it eventually managed, while one unforeseen international event precipitated another.
The British Empire went through its own dynastic cycle, and withered after two devastating world wars. The Americans usurped. In Asia, thanks partly to the grossly miscalculated Japanese invasion, the Nationalist Party (KMT) got kicked to Taiwan. Again, IF not, China could be a vibrant Democracy today, with a private Central Bank owned by the Jiang and Song families plus other unnamed “foreign shareholders”, running the country anonymously just as the Federal Reserve does in the USA?
But that wasn’t how it happened. Mao was indeed a monster to some wasn’t he? Aargh!
Notwithstanding its Anglo roots, the young American Empire turned out quite different from old Britannia, at least in style. Understatements and ostentatious display of Christian modesty soon went out of fashion. Some old Brits might have once fantasised manipulating its muscular American offsprings from behind the curtain. Instead, they ended up with a special relationship and got patted on the head only when needed to join a good fight, which has been quite often.
Further down the time-line, China transforms at unprecedented speed, and becomes number two economy, thriving on Homo sapiens’ insatiable appetite for useless gadgets. It now depends on the kind of trading environment Macartney advocated, and Qian Long sneered at.
Meanwhile, Lord Macartney’s modern countrymen have also acquired a drastically different world view. They now know that other minor races, depending on circumstances, are just as capable and ridiculous as themselves. Having managed a global portfolio before, they now understand it’s a thankless job. Nonetheless, the American kennel must feel a bit cramped.
Decades of populist Democracy have driven the best European minds away from politics. Britain is no exception. But it has managed to preserve the nation’s core characters better than most of its neighbours. Ironically, the undemocratic but popular (and discreetly influential?) Royal Family has been a stable anchor.
It looks like the 21st Century will either be dictated by American exceptionalism, or shaped by a truly multi-polar world order. In a multi-polar scenario, Britain’s substantial international experience will be extremely valuable if used to promote the interests of Britain, Europe, and the planet, in that order, although national interests cannot exist without a planet.
Multi-polarity would most likely revolve around a sturdy EurAsian axis. Closer cooperation between China and Britain will have a catalytic effect on the reinstatement of this historical backbone of trade and civilisation exchange.
Queenly subjects and commies may seem strange partners. But deep down, China and Britain have much more in common than meets the eye. Both countries have a conservative and experimental social approach. Britain took a long time to evolve politically, crossing the democracy river by touching stones for more than a century, until the water got too deep. Both countries are more comfortable with pragmatic governance than ideology. Both understand limitations, albeit with different priorities at times. Both Great Britain and the Middle Kingdom have by now acquired the maturity and humility to “seek common grounds and accommodate differences". Most important of all, neither harbours a Hollywood or religious craving for Armageddon.
Perhaps two centuries after George’s visit, conditions are finally ripe for China and Britain to revive his proposal for multilateral benefit?